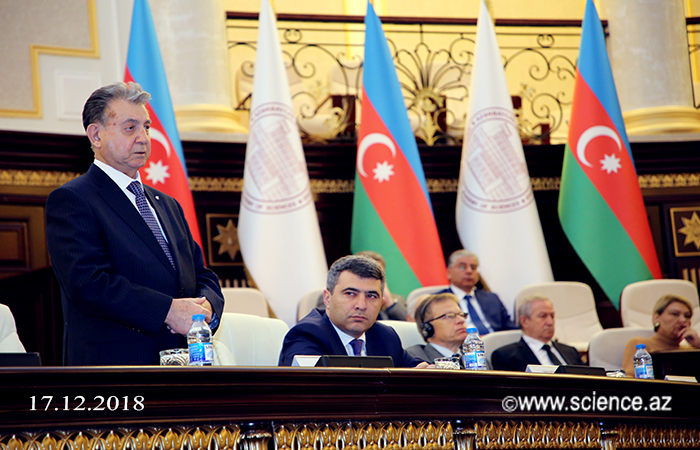 ANAS held international conference on "Research of photosynthesis and hydrogen energy for sustainable development" dedicated to the 90th anniversary of academician Jalal Aliyev, organized by the Ministry of Agriculture, ANAS Institute of Molecular Biology and Biotechnology and the International Society for the Study of Photosynthesis (ISPR) on December 17.

The conference was attended by representatives of the government, deputies of the Milli Majlis, famous scientists, as well as scientists from Russia, Ukraine, Kazakhstan, Georgia, Turkey, Iran and other countries of the world. At first, the participants honored the memory of an outstanding scientist in the Avenue of Honor, laid flowers and a wreath at his grave.

With fundamental research and scientific achievements, academician Jalal Aliyev identified a number of new areas of biological science in Azerbaijan and made a significant contribution to solving its actual problems. The application of the results achieved by the scientist, always guided by the unity of theory and practice, is of great importance from the point of view of the development and increase of the productivity of the republic's economy. Jalal Aliyev has a great merit in developing a strategy for the protection of biological diversity in the country and its effective use. His scientific achievements related to photosynthesis are successfully used in many countries of the world.

“Academician Jalal Aliyev has provided the basis for developing of molecular biology and gene biotechnology, developing research in the field of biology in Azerbaijan”, said ANAS President, stressing that, scientist also played a significant role in shaping the Academy’s international relations.

It was noted that, Jalal Aliyev, taking part at the prestigious international events in the former Soviet Union, used the latest innovations in his scientific quest. President of ANAS Akif Alizadeh also spoke about the high human qualities of an outstanding scientist.

Speaking, the Minister of Agriculture Inam Karimov told about Jalal Aliyev’s merits in establishing bilateral cooperation between the Ministry of Agriculture and ANAS. In his speech, the Minister noted the Agreement of Intent, signed in September of the current year between the two institutions. He stressed that, the signed agreement is a serious step in the preparation of highly qualified personnel and joint organization of events, and one of them is a conference dedicated to the 90th anniversary of academician Jalal Aliyev.

The Minister noted that, according to the Order of President Ilham Aliyev “On the 90th anniversary of Academician Jalal Aliyev” a special plan of events was prepared in organization led by him.

It was noted that, academician Jalal Aliyev defined the fundamental research of new areas of agrarian science in Azerbaijan. The application of the results obtained by scientists led to the sustainable development of agrarian science and these achievements are of great importance for increasing labor productivity.

"Jalal Aliyev devoted his life not only to scientific creativity, he prepared about 260 highly qualified specialists in the field of agrarian science" establishing contacts with authoritative international scientific organizations and promoting the achievements of Azerbaijani science.

Academician Jalal Aliyev’s works has always been highly valued by our people and the state, for his contribution to the development of science he was awarded the Istiglal and Sharaf Orders, which are the highest awards.

Academician-secretary of the Department of Biological and Medical Sciences, academician Ahliman Amiraslanov told about the activities and contribution of the outstanding scientist to science, about his scientific and organizational activities. He stressed that, academician Jalal Aliyev is a scientist who laid the foundations of an interdisciplinary scientific direction in Azerbaijan.

Then, ANAS Vice-President, Director of the Institute of Molecular Biology and Biotechnology, academician Irada Huseynova told about the life and scientific activities of the world-famous scientist Jalal Aliyev, expressing pride that, she was a student an outstanding scientist. She noted that, academician Jalal Aliyev was the creator of the new directions of biological science in Azerbaijan, an eminent scientist who has merits in the development of this sphere.

During the conference, the secretary of the International Society for the Study of Photosynthesis, Professor Julian Eaton-Ray delivered a paper on “The contribution of Academician Jalal Aliyev to the world science of photosynthesis”.

Then, held presentation of the Jalal Aliyev award, established by the International Society for the Study of Photosynthesis.

Academicians Isa Habibbayli, Teymur Bunyadov, Yagub Mahmudov, Asaf Hajiyev, corresponding member of ANAS Novruz Guliyev, members of the Milli Majlis and others took part at the event and shared their memories of the scientist. Speaking on behalf of the family of the scientist, honored architect, winner of the State Prize, Rasim Aliyev shared his thoughts and memories about the academician, spoke about his contribution to science.

At the end of the event, was demonstrated a documentary on academician Jalal Aliyev.

©All rights are reserved. Citing to www.science.gov.az is necessary upon using news.